Welcome to the kalecarnegie.com site 2022!

The not-quite-ready for prime time vegan guru and the doomed-at-the-start health movement!

How to Lose Friends
& Inconvenience People:
Your life as a vegan! 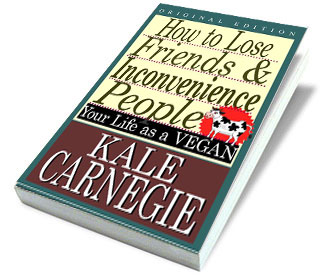 Beef or Cow?
Read how to avoid this scenario in the lost classic, The 7 Habits of Highly Fanatical Vegetarians
View on Youtube
What if?
What if there’d been a vegan health movement in our history that no one remembers? What if the “failed” authors of that movement were the real, creative geniuses who laid the foundation (but never got the credit they deserved) for the much later self-help movement authors who “borrowed” their ideas and achieved fame and fortune? Discover the intrigue (plus real health information) when Kale Carnegie (Dale’s less famous, vegetarian older brother) presents How to Lose Friends & Inconvenience People: Your Life as a Vegan Includes the 5 Lost Classics:
• As a Man Eateth and Poopeth by Aloysius Sheitshoveler, III,
• The Power of Positive Drinking. A Pee Classic by Vorman Nincent Pee
• The 7 Habits of Highly Fanatical Vegetarians by Steven Scurvey
• Awaken the Vegan Within by Rony Tobbins
• Who Modified My Peas? by Anonymouse,
plus humorous author bios & trivia, failed marketing strategies, why the movement ultimately crashed, all wrapped around real information to help you eat better, lose weight and adopt a healthy lifestyle!
About the series
Yes, Virginia, you really CAN judge a book by its cover! The Health with Humor™ "books" contain valuable, accurate, relevant, up-to-date and useful information presented with just a dash of humor sprinkled throughout for easier digestion by vegetarians and non-vegetarians alike! We like to say, they offer "fun on the outside, facts on the inside!" Series 1: History's Original (though largely forgotten) Vegan Self-Health Movement! Available in your choice of novelty covers (as shown) to share a laugh with friends! (They won't believe these books actually exist!
The Forgotten History and "Lost Classics" of the Original Vegan "Self-Health" Movement 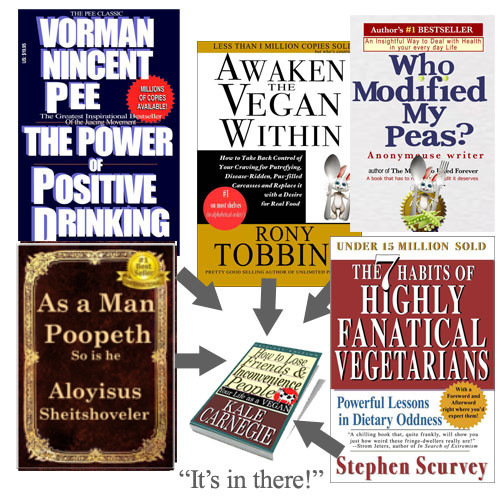 The modern self-help movement owes its very existence to the pre-industrial vegan self-health movement!
It's true (at least, that's our story and we're sticking to it)! Unbeknownst to many, the American vegan movement had an amazing start in the early 1900s with the publication of the classic, As a Man Eateth and Poopeth by Aloysius Sheitshoveler, III. As America and ultimately the rest of the world turned to industrial farming, it became increasingly evident that natural eating was, in fact, better for the nation's health.
Following Sheitshoveler's lead, many authors jumped on the bandwagon publishing books, and hosting seminars to spread awareness and build the momentum of the nascient Vegan movement! Rony Tobbins, Vorman Nincent Pee, Stephen Scurvey, and myself, Kale Carnegie and many others produced titles like The Power of Positive Drinking, The 7 Habits of Highly Fanatical Vegetarians, Who Modified My Peas? and the unforgettable, Awaken the Vegan Within: How to Take Back Control of Your Unnatural and Pitiful Craving for Putrefying, Disease-Ridden, Pus-Filled Carcass and Replace it with a Normal & Sensible Human Appetite for Real Food. And, in Europe, authors like Tichard Remplar, author of The Rules of Veganism.
For various reasons--some obvious and some not--the movement peaked, stalled then crashed. For some, it was due to poor execution; for others, bad branding or messaging; for others still, a slight change in a title or pen name might have made all the difference in the world. Perhaps it was simply bad timing for a movement whose time had simply not yet come. Whether this was all due to natural causes, group infighting, or the insidious sabotage of larger forces is still being debated today, but whatever the reasons, these books and their authors disappeared languished in publishing purgatory never to be seen from again.
Fast-forward a few decades to the modern self-help movement that took off in the 80s and 90s. We vegan pioneers watched (some of us in envy and horror) as many of our original concepts and titles were repackaged and resold to a hungry public desperate for something new to latch on to under the heading of new age, self-help and motivation!
Well, it is now a new millenium, and I believe our time has come again! Our original classics contain information perhaps even more vital today than ever before. There is even more processed food on store shelves. Factory farming has increased. Pesticides and perservertives permeate our food supply. Now, climate change caused, among other things, by wasteful farming practices is now a legitimate concern for many.
I, therefore, present to you the unearthed, uncovered, resurrected, revitalized, rejuvenated and dusted off copies of the original, trend-setting, ground-breaking classics! The "Best of" history's forgotten vegan movement are now availabke once again!
What has changed this time is our marketing savvy. The movement can learn from its past in terms of its marketing. Therefore, I present to you with their original groundbreaking cover designs that laid the foundation for the success of other authors generations later! (We harbor no ill will or resentment or envy, or lawsuits for the success of others. Really. Well, maybe there was one lawsuit.)
In any event, the people are ready. We now try again in my award-aspiring book, How to Lose Friends and Inconvenience People: Your Life as a Vegan (Don't call it a comeback!) --Kale Carnegie, the spiritual advisor of the NEW vegan self-help movement of today and beyond!

"We shall not make the same mistakes of the past!" --Kale Carnegie, author of How to Lose Friends and Inconvenience People: Your Life as a Vegan

Who is Kale Carnegie?
Meet The Carnegie Clan
Most people aren't aware that James and Amanda Carnegie actually had 9 children. Here is a complete list that includes the lesser-known Carnegies. 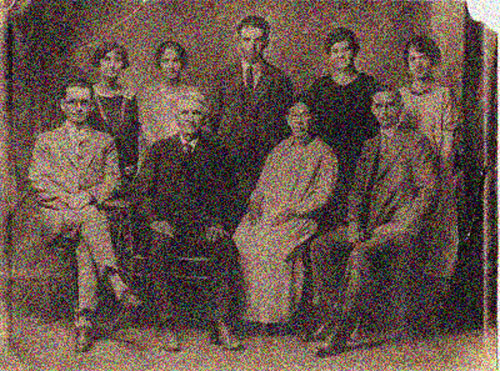 This photo has absolutely nothing to do with the story below.
1. Bale Carnegie, the first child, who followed in his grandfather's footsteps and became a farmer. 2. Dale Carnegie, of self help fame and, arguably, most well-known. 3. Fale Carnegie, who sadly, never really amounted to much. 4. Jale Carnegie, who chose a life of crime and is currently serving 20 to life in Folsom Penitentiary for tax evasion. 5. Kale Carnegie, (our movement's hero) the estranged middle son who never quite fit in and who was disowned for his fringe, "namby pamby," vegan lifestyle, 6. Nale Carnegie, who ran a business selling prefab homes and hardware in Modesto California. 7. Pale Carnegie, the only daughter, whose beauty products & make-up empire was sold to Amway for millions in cash plus stock options and a Diamond position in the company. She now earns additional millions in passive, residual income as a network marketing millionaire! 8. Tale Carnegie, a compulsive liar who turned that personality trait into a lucrative political career in Congress, and 9. Irving, the last child, who wholesales suits in Manhattan's fashion district under the name I.B. Carnegie, which stands for Irving Barnaby....Carnegie.
Source: A Carnegie in Every Pot: Remembrances of My Life by Paleonta Carnegie-Childless (an unauthorized autobiography)

Okay. Okay. Time to confess. Um, the books and the family are fake....
but the T-SHIRTS are real! Order now!

(Images are available on mugs, clocks, pillows and more!) 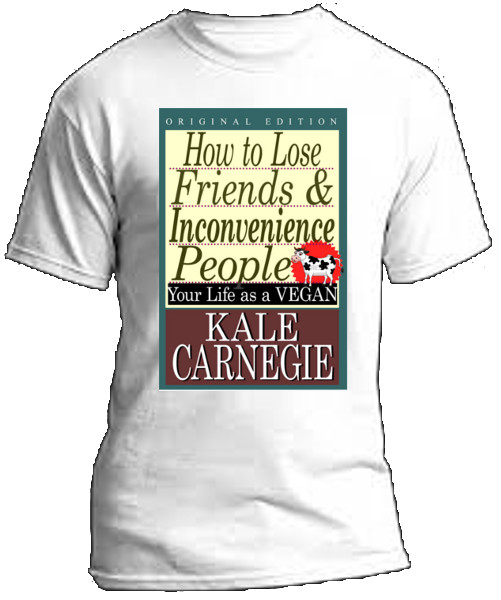 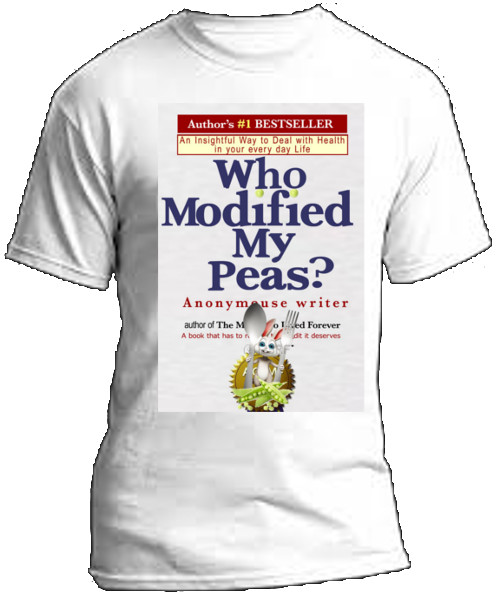 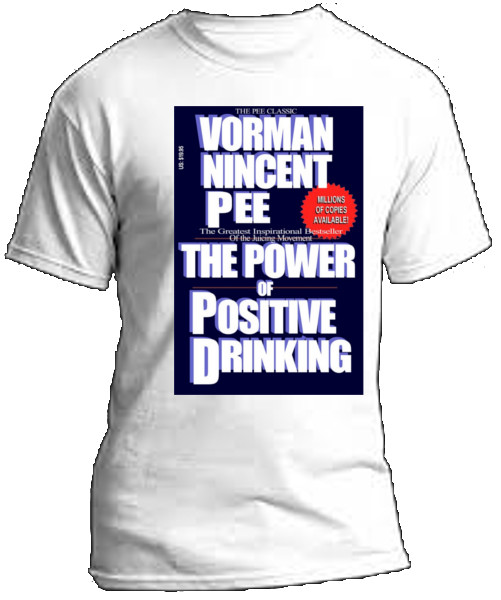 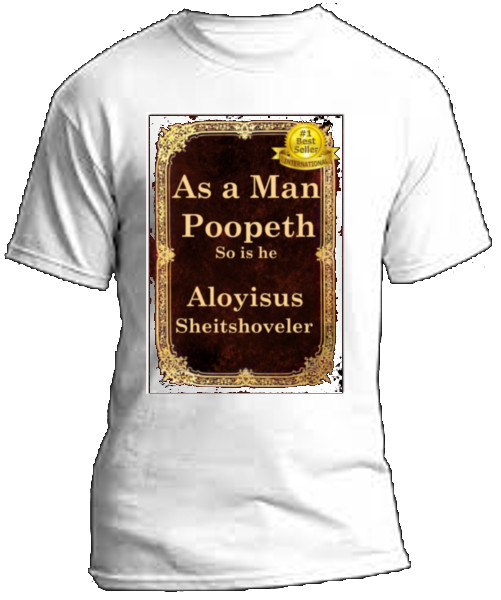 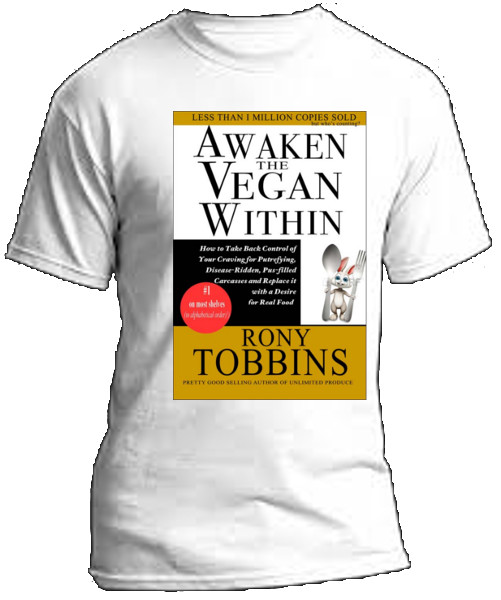 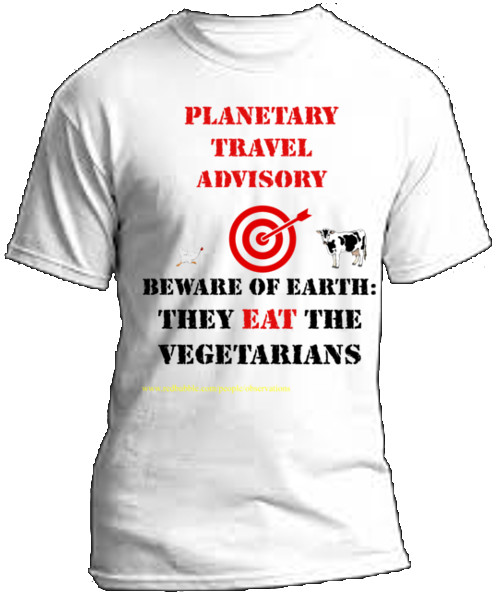 On the other hand, There are some real health books books in the Ageless Adept™ series:

"Perfect health, long life and eternal youth are not the random genetic blessings of a chaotic or capricious universe, but natural birthrights that can be accessed through the mindful acceptance of simple truths, activated by the committed practice of proven activities, and sustained by advancement along a single known path. This is that path." --Walt Goodridge, the ageless adept!
Donate, support Walt's Projects